Dachshund is a long and short canine. It brings with it three varieties. These are the longhaired, wirehaired, and shorthaired. Three sizes exist in each of these three varieties. Its body is longer compared to its tall and muscular short legs. This dog has an elongated head with a convex skull. This skull is arched with visibly protruding eyebrows. Dachshund’s muzzle is long.

Its jaw is normally robust with a non-pendant lip. Its almond shaped eyes are dark brown, red, or black. On its cheeks hang long mobile ears. Strong protruding sternum appears on its body. Its coat ought to be uniform, sleek, and shiny. They have a huge array of colors. These are black, chocolate (brown), red, Isabella (fawn or tan), cream, gray, and blue.

This breed dates back to the middle ages. They come from German dach that means “badger” and also hund that means “dog.” The dogs were common and widely used in the seventeeth century Germany mainly as hunting dogs. Their sleek and short frames combined with an outstanding sense of smell gave them the ability to hunt above, and below ground.

They were also able to track animals for a number of days. A number of sizes were developed throughout the years. Smaller Dachshunds for purposes of hunting foxes and larger ones for hunting boars. In the year 1895, a club was formed to promote this breed in the United States. This club was known as the ‘Dachshund Club of America.’

The Dachshund has an average lifespan of twelve to fourteen years. It occasionally suffers from gastric torsion, diabetes, Cushing’s disease, keratoconjunctivitis sicca (KCS), patellar luxation, seizures, and deafness. The intervertebral disk disease (IVDD) is the only major concern that affects the dog. This condition causes spinal cord problems because of its elongated body. Obesity increases risks of spinal injury. Eye tests ought to be included in the regular physical check up of this dog. This is especially true for “double dapples” or the Dachshunds that come with two different/unique colored eyes that are prone to visual and hearing problems.

The Dachshund is courageous, lively and clever. He is usually bred for utmost perseverance. This is another way of reporting that he can turn out to be more than stubborn. These dogs boast of a reputation of being overly fearless and entertaining. Nonetheless, being cuddled is what these dogs look for most in people. This means that in most times if not all times, this dog always insists on having his own say and way. The most important thing to be informed about this dog is the fact that its personality varies with coat type.

The wirehaired Dachshunds are the most mischievous troublemakers. This is because of the terrier that appears in their background. The longhairs on the other hand are normally quiet and calm. Smooths bring with them a personality, which is a mix. This means that it lies somewhere in between. The mini Dachshunds can turn out to be shy or nervous. The best thing is to avoid puppies that manifest these characteristics.

It is important to expose them to people, experiences, sounds and sights. This goes miles in ensuring that they turn out to all rounded dogs. If you wish, you can enroll them for training or at a kindergarten. Take them for leisure walks, to busy parks and shopping. This way, they get to meet people thus bringing out the best in their personality.

They are easy to train. Since they are active and with stamina, there is no doubt that training them daily is the way to go. Discourage them from jumping as this can lead to spinal injuries.

Generally, they are usually ok alongside other pets. Without proper leadership, they can turn out to be obstinate, irritable and jealous. They can also be quick to bite and refuse to be handled. It is important to note that these negative traits are not their normal. They are syndromes that manifest as a result of lacking proper care. They are good followers and companions.

Their bodies are low slung and long. They enjoy power of stamina, dexterity and ease of movement. They have very strong muscles and a waist that is tapered slightly. Its profile is trim. The dog has a distinctive forward ear that protects its ear canals.

It is important to take care of the coat just like with any other dog. In terms of color, cream, red, black, black and tan, chocolate, blue, chocolate and cream exist.

They are divided into two dimensions that is the mini and standard type. Standard weighs roughly sixteen to thirty two lbs.

Their drooping ears have a tendency of accumulating dirt. Therefore, clean regularly and keep dry. Moreover, ensure that you comb the coat as much as possible to get rid of all unwanted and harmful particles and germs.

Because of their plenty energy and stamina, ensure you take them for walks and exercises. They are active and two half mile walks every day will be magical. 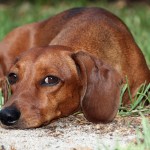 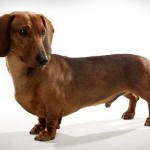 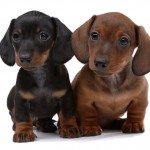 The recommended daily amount of food intake is a half to one and a half cups of very high quality dry food.

Information and Facts of Dachshund :