This breed of dog has traditionally been used as hunting dog. It was used to hunt some small mammals in the islands. The name of the dog is means water dog. The dog can grow up to 23 inches and generally, he weighs 35 kilograms. This dog breed has been noticed as unsuitable for those who are beginning to breed dog.

Efficient dog breeders Dutch developed this dog. The dog’s name denotes water dog. This breed was used to hunt for small mammals in water. It was rare to see him outside as he spends most of his time in the water. According to researchers, he descended from old water dog. The main specialism of the dog was to locate and kill the otters, which really disturbed the anglers as they also competed for fish with them. The dog is rugged, well-built, and very effective dog for this purpose. Since he is a fearless dog, he usually hunts single handedly.

Because he is an active dog, he rarely falls sick. However, like any other animal he is bound to fall sick once in awhile. Before you purchase him, make sure that you are purchasing a healthy breed. A health clearance must be done and given to you. The most common diseases likely to affect him are cataract, leggs perthes, patellar luxation, and hip dysplasia among many more.

This dog is not suitable for beginners. This is because he is very hard to train. Training them requires a lot of patience. Apparently, this dog is an all weather and all-purpose dog that is very suitable on the farmland for his hunting skills. Since he is demanding, he can also be very sensitive. They learn and take instructions very quickly however, they can be independent minded. Because of their domineering characters, you should not allow them to take over the house. When dealing with them you should be firm and careful.

The dog requires a lot of exercise. For you to successfully breed this kind of a dog you need to have a large piece of land that he can use to run around constantly. Once you put him there, he will protect the land. Since the dog is a water dog, it is good if he is taken for swimming occasionally.

This is a very stubborn dog that needs enough patience for you to succeed in training it. Once in awhile let the dog run around the compound so that he can be able to exercise.

In terms of the behavior, the dog is very reliable. During hunting, he will work well to ensure he catches his prey without any delay. The dog is not good with the kids but can easily tolerate older children. Just like any other dog, which has been kept as human companions you, should not be away from them for a long time or else they may feel stressed. Ensure that your visitors are informed about the dog since he can be aggressive and harm them.

The dog has a thick curly hair that covers most parts of the body except the legs. Since the coat of the dog is oily it must not be wooly to prevent making the dog be dirty. From the outside, the body appears to be square in his appearance. When the dog is alert, the tail of the dog curls over the back of the dog.

The coat colors of the dog include live and white, black and white, solid liver and solid black. This coat is often thin and curly.

Since the dog is wooly, some brushing once in week will suffice. He is a water dog hence does not require a lot of cleaning now and again but once in a while you should make sure that the ear and the area surrounding the eyes are clean.

Wetterhoun has a strong head with thick and curly fur. The texture of the layer of the fur should be not be wooly as this might prevent it from resisting water. The breed has dark eyes he sometimes have unusual expression that differentiates him from other breeds.

Wetterhoun is very good in water actually, he can be used for hunting by anglers.

This breed is not recommended as an apartment breed since he is an outdoor dog. If you keep them in such areas, they will feel very distressed. That is not just their kind of lifestyle as long as you provide them with adequate exercise they can live well in kernel. Besides, this dog also does well in cool environment as long as there is enough shelter.

The recommend amount of food is around ½ to 2 cups o f highly nutritious dog food twice in a day. However, the amount of food given depends on the size of the dog. Bigger dogs often require a bigger amount of food. 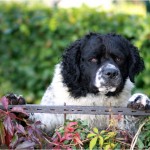 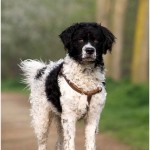 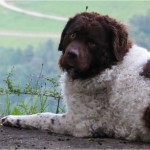 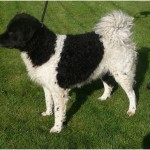 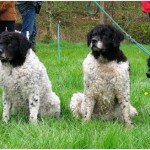 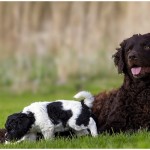 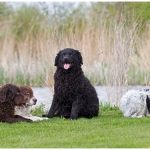 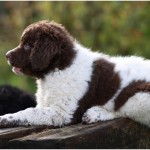