These dogs are relatively unknown outside Hungary, but are becoming more and more popular in Finland and Sweden. They are a good all-round breed of dogs and, perhaps because of this, one kennel club has classified them as “Miscellaneous”.

These dogs originated in Hungary in the 17th or 18th century when the native Puli-type dogs were bred with shepherding terriers which were brought from Germany and France. This produced a herding dog that also had terrier characteristics. At this time, it was also a working dog and was freely bred. Starting in the 1970s, however, the Puli and the Mudi were used extensively for breeding. The dogs were virtually unknown outside of Hungary but a few years later, in 1973, the first Pumis travelled to Finland. In 1985, they went to Sweden, Germany, Italy and the Netherlands and, about twenty years ago, they arrived in the United States.

As with almost all dogs, they have a great tendency toward getting hip dysplasia and patella luxation. On the other hand, there is a wealth of information regarding their health status in Finland and Sweden. There, about 80% of these dogs have healthy hips. There are no known genetic defects unique to this breed so Pumis are a very healthy breed, in general. The Pumi may have an average life span but many of them have been known to live for 19 years.

They are considered to be lively, active, protective, vocal, intelligent and reserved.

These dogs do need a lot of exercise. They should be considered to be outdoor dogs and, although they can be great for families in towns and cities, they are at their best on farms where they will be self-motivated and find a lot of activities to do on their own. If they do live in the city then alternatives such as a daily walk or jog must be provided. While walking, the human must be in front so that the dog understands that the human is the leader in the relationship.

They do seem to be easily trainable but like virtually all pack animals, if they determine that their caretakers are weak, indecisive or inconsistent then the Pumi will become more willful in the belief that he, himself, is the one who needs to make the decisions.

Like its Uncles(?), the Mudi, the Pumi is multi-functional. They are equally capable of being a sheepdog, guard dog or hunting dog. Because of its terrier ancestry, it is interested in the homes of wild animals such as rabbits and foxes. It can also go after rats. At the same time, they are quite home at home; they make excellent house pets. They make excellent watchdogs and will bark repeatedly and loudly with unfamiliar people.

They resemble Terriers in many ways, especially in the head with its longer muzzle and semi-pricked ears. Their legs are prominent.

They have a curly, thick and average-lengthed double coat. The outer coat is harsh while the inner coat is soft, but not smooth or velvety. Many Pumis are gray or various shades of it. Gray Pumis are actually born black but begin to change their color after about six to eight weeks. They are genetically consistent so the final shade can be determined by looking at the parents. Other than that, there is an enormous variety of colors: black, white, yellow-brown or sable. Dogs that cannot be presented at shows are black & tan, brown, blue and even wolf-colored puppies arise occasionally.

Although the outer coat is curly, it is easy to groom the dog as the coat does not mat easily. Combing and brushing occasionally will keep it looking nice. Removing extra hair from inside the ears is important. If you are planning on showing the dog, then professional grooming is recommended.

They are a part of the Medium-sized dogs, but may be on the shorter end of the group’s size range.

When they have puppies, there are usually four to seven in the litter.

It is quite easy to give them proper care as they are easily groomed and they can learn and be trained readily.

There are no feeding instructions specific to this breed, so a good high-quality dry dog food should be sufficient for them. This should be provided to them twice a day. 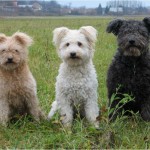 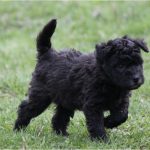 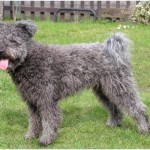 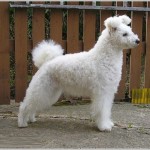 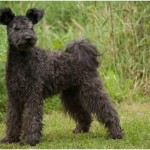 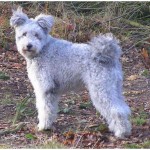 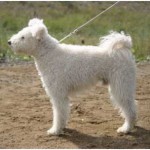 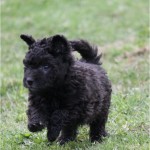 Information and Facts of Pumi :