A consensus on their characteristics indicates that they are very smart, highly intelligent, yet become bored very easily (if they are not mentally challenged), extremely talented, have a bubbly temperament, clownish yet are very good guard dogs, are quite large and heavy for Terriers and thus are called The King of the Terriers, were bred to chase ground animals, have a non-shedding double-layered coat. The Airedale puppies are bundles of energy.

Airedales were named after the valley of the same name, in the West Riding of Yorkshire, a county in Northern England. They began in the mid-nineteenth century and in 1864, were exhibited for the first time at a championship dog show, although they continued to be used primarily as hunting or sporting dogs. Two of the dogs that died on the RMS Titanic were Airedales. One Airedale was named “Kitty” and belonged to the American businessman John Jacob Astor IV, one of the wealthiest people in the world at that time. The other belonged to another American, William E.

Carter, who owned the Renault automobile which was replicated in the famous love scene of James Cameron’s film, Titanic. During World War I, they were used as mail carriers in England. Almost two decades later, the Oorong Airedale was developed in the United States, and which was named after the originating dog who went by the name of “King Oorong 11” and who was considered to be a great utility dog.

Airedale Terriers may live for fewer years than many other domestic dogs but they live about the same length of time as do other breeds of their size. About four out of ten dogs die from cancer while only one out of seven die from old age. They are generally a hardy group of dogs, although they can suffer from eye problems, hip dysplasia and skin infections, especially dermatitis (as do most terriers) which can be undetected because of their coats.

They are also subject to stomach bloat which can be fatal as it can lead to heart disease and collapse. This bloat is usually a result of exercising or activity too soon after eating, which can be troublesome to people as well.

They have been described as being independent, stubborn, outgoing, alert, friendly, and most commonly as intelligent, strong-minded or confident, and stoic or courageous.

They are working or hunting dogs, and can work with cattle or livestock, so they must be kept active if they are not directly engaged in those activities. They ought to be walked or kept physically active for 20 minutes at a time, twice a day.

They are very trainable, but if they are not trained appropriately then they can unnecessarily annoy and irritate other animals.

They have been known to be good at herding, and to chase other animals.

They are the largest of the Terriers of the United Kingdom.

Their coat is generally black as puppies, but then changes to primarily brown as they grow older. They have a rough topcoat but a soft undercoat.

Grooming the Airedale can be problematic because of the rough coat and because cutting the coat can lead to dead hair roots which can be the cause of their frequent skin problems and irritations.

Even though they are the largest of the terriers, they are still classified as being of the small dog group.

Airedales in the United Kingdom are often seen as police dogs. In the United States, they were favorites of Presidents Theodore Roosevelt, Calvin Coolidge, Warren Harding (who gave his dog a special chair for Presidential Cabinet meetings) and President Franklin Delano Roosevelt who greatly praised the breed. John Wayne had an Airedale in his youth who was called “Little Duke”, hence the former’s nickname.

Feeding, activity and their proper grooming need to be carefully monitored. 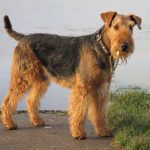 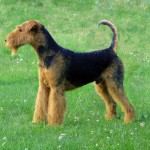 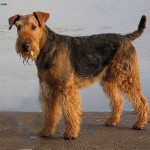 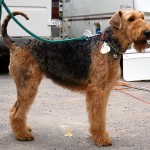 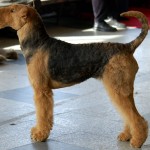 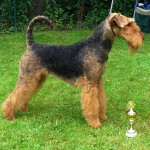 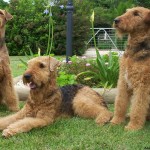 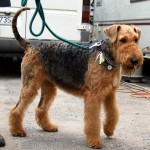 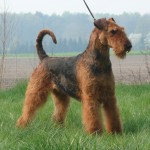 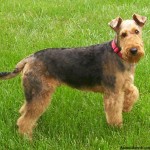 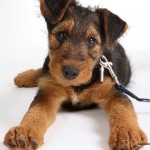 Care must be given that they do not exercise or are not active shortly after eating. They can eat 4-6 cups of food at a time.

Information and Facts of Airedale Terrier :