Their reputation precedes them. All you need to do is to tell people that you have a Pit Bull and nefarious people will stay far away from your home.

Yet, they could not escape their pit-fighting past and reputation. In the early 1930s, the American Kennel Club decided to rename it as the American Staffordshire Terrier for show purposes. Regardless of its name, they are also being used now for police dogs, therapy dogs and continue to act as companion dogs.

They apparently have been bred well as they usually have a lower-than-average chance of getting medical conditions such as hip dysplasia (ever-present in most other breeds); hypothyroidism (often resulting in weight gain, reproductive problems, poor coat and other issues); heart disease (in which the dog has little energy or even dies suddenly, and which can be diagnosed by a veterinarian listening for a heart murmur); and luxating patella.

However, APBTs are still prone to allergies, especially skin allergies caused by fleas, grass, dust and pollen. This can result in tremendous itching and discomfort which the dog will attempt to alleviate by chewing, biting and digging. This activity, however, can result in other infections from the damaged skin. Their lifespan is anywhere from 8 to 15 years, but it is more commonly toward the higher end of the range.

They have been described as being friendly, affectionate, clownish, intelligent, obedient yet stubborn.

They need a great deal of exercise, for usually at least one full hour each day, and consisting of long walks, short runs or games such as fetch. Without it, they can become destructive (very destructive), and may even develop a neurosis of chasing after their own tails. They are probably best in a relatively large home with a yard as, even with frequent exercise, they may feel trapped within an apartment or condominium.

As with virtually all dogs, training should be done early, consistently, and in a calm yet firm manner. Like many other Terriers, they will not respond well to harsh discipline. Unlike many other Terriers, they do not respond to treats because they have a very short attention span and quickly become disinterested. Thus, training can be a very intensive and time-consuming process.

They do tend to be aggressive toward other dogs (even larger dogs) and will not back down from a challenge. Thus they must be kept on a leash when they are out in public. Socialization is important to every dog, and it is even more important to American Pit Bull Terriers so that they can interact as they should with other pets and with children.

They are not small dogs, but they share this dog’s propensity for separation anxiety. Thus, they must be given daily exercise and sufficient activities so that they are distracted when they are left alone.

They have a short, shiny and stiff coat. These dogs come in all colors, most commonly, blue, brown, red, gray, brindle, and black & white.

Brushing with a stiff brush, wiping with a damp cloth, and bathing occasionally are all that is required.

They are of the Medium-sized group of dogs, and have a corresponding body appearance.

Exercise, obedience training, keeping them with you (rather than leaving them outside, as they form strong bonds with people and families), and not leaving them outside (as they do not tolerate cold weather) are all important in caring for your APBT.

They are commonly allergic to beef, corn, wheat and rice so should not be fed those, unless there is evidence otherwise. 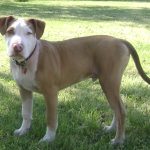 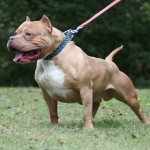 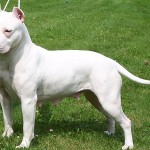 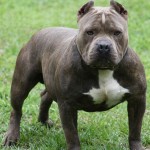 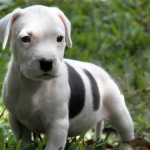 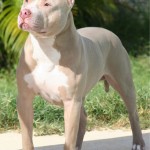 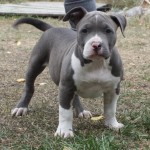 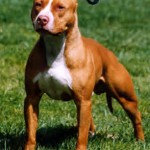 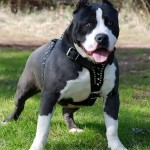 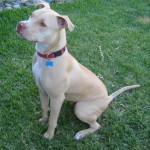