Tibetan Spaniel are some of the most intelligent dogs available nowadays. They are mistaken for the Pekingese of China. They are very active and small. They are kept mostly for companionship in the family. They are thought to have an origin that relates to 2,500 years ago. It is one of the dogs which are not supposed to be taken for sports. They have a long body, and they are short. They are known for their brown eyes which are oval and medium size, as well as their black nose. It comes with a coat of different colors, so, unlike the other dogs, the house owners will have a variety of colors to choose from.

These dogs date back in the 11100BC in the Tibetan monasteries, hence the name they have. They were used as pets during those times and in the monasteries, and they were very much adored. They were bestowed with the task of alerting the communities of anything which could be happening. Because they used to stay on the top of the walls of the monastery, they could see strangers from far and bark, alerting the people of visitation. It is from this that the people of the monastery used to refer to them as little lions. Even though, they are small, they were tough enough to deserve the name. Their being is explained to be as a result of other dogs from China and Buddhist countries.

Tibetan Spaniel are very healthy, but just like all other dogs, it is prone to some diseases and conditions. Those who want to buy one for their house, they should ensure to get it from some recognized breeders. Besides, it should be cleared of certain diseases. This is only done if they are more than two years, reason being that they do not get some of the diseases until they are mature to this age. The diseases are Progressive Retinal Atrophy (PRA), Partellar Luxation, which are identified as eye and bone disease respectively.

They are intelligent dogs, so in most cases, they may not obey what they are commanded to do by any person. They need to be exposed to many things, people, and sounds at an early stage. This helps them to know how to socialize. They usually make perfect watch dogs. This is because; they have the ability to notify people of presence of strangers by barking. It can be trained not to bark when it is not necessarily. It may not be an easy task doing that since they tend to be ignorant.

It is not that easy to train, because of its intelligence. In most cases, they will do what they feel like doing. The best thing to do is to be gentle to them, as well as training them consistently. That way results may be realized.

They are perfect watch dogs, even though they love to explore. The house yard should be well fenced so that they do not find their way out.

They appear to be have a longer body than legs, they have black nose and oval eyes which are brown in color. They have a hairy neck, and they are mistaken for a Chinese dog.

These dogs usually have a silky double coat which gives it a smooth face. The dogs come in any color, as well as mixture of certain colors.

The Tibetan Spaniel should be bathed every 6 to 8 weeks. They should have their nails trimmed 1 or 2 times in a month. They should be brushed on a weekly basis to keep them off lose hair. They should have their teeth brushed as well. This helps ensure that there is no tartar which builds up in the teeth, and that any possible bacteria is done away with. It is better done on a daily basis, even though it can still be done on a weekly basis. That way, the teeth are preserved.

They have a body that lies low on the ground because of their short legs. They have hair all over their ears, tail, legs and some few hairs on the other parts of the body.

They have to be socialized with people from the time they are puppies. This will help them to reduce on barking to unnecessary things and people.

They are better off with people than being left on their own. If they are left on their own, they are likely to go exploring. This may cause them to go far, making it difficult for them to be traced. They are intelligent, and they can think of what to do. When training them, patience and consistency is the main point. This is because, they can be very tiring since they have their intelligence, which may make them to be ignorant of the commands that they are given. It is best to have them trained from tender age. The other thing is that, they require to be taken for exercises on a daily basis. The good thing is that it is not compulsory, and they do not need rigorous training. Some walk for a few minutes within the house yard will do. 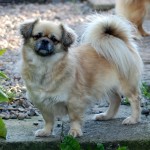 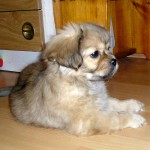 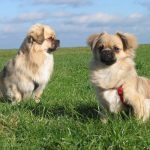 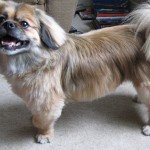 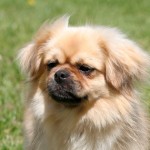 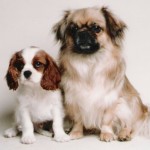 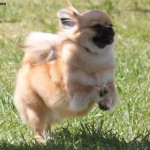 Their meals are dictated by their sizes, there metabolism as well as their level of activity. The food should however range from ¾ to 1 Cup of food on a daily basis. That food should be divided into two meals of the day. Note that, the food should be dry and of high quality. When feeding them, continually identify the possibility of it becoming obese. In the case that it is, it best to take precautionary measures and cut on the food intake.

Information and Facts of Tibetan Spaniel :