In the late 19th and early 20th centuries, a recessive gene for white coats was introduced into German Shepherd Dogs, who are direct ancestors to the American White Shepherd. When the Nazis took over Germany, dogs with white coats were disqualified from shows. Perhaps similarly, white-coated German Shepherd dogs were banned in the United States starting in 1968. However, those dogs that have been registered with the American Kennel Club are permitted to compete in performance events. Moreover, White German Shepherd breed clubs, scattered throughout the United States and Canada have formed their own small shows. In 1973, the first such show was held in Canada, in which 8 dogs were entered and 25 people attended.

White animals (both dogs and cats) are notorious for being subject to a greater number of maladies and medical issues. However, the American White Shepherd may not be inclined to a greater risk of ill health. They are subject, however, to the following, some of which afflict all other breeds: hip and elbow dysplasia; arthritis; eye diseases; bloat; skin or coat problems; lupus; congenital spinal disease; allergies to fleas, airborne allergens and food; and malabsorption syndrome. They only rarely suffer from autoimmune problems.

There are many adjectives to describe their personality. Among them are self-confident, faithful, brave, aloof, alert, courageous, keen, fearless, cheerful, obedient, tranquil, confident, eager to learn, serious and clever.

In terms of show and competitions, they excel in performance events such as competition and rally obedience, agility, tracking, and flyball. They have retained their herding instinct and have earned numerous titles verifying this.

Because of their natural obedience, eagerness to learn and intelligence, they are adept at being trained. However, it must be kept in mind that they, along with many other dogs, will not respond desirably to training if the trainer is passive, weak-minded or inconsistent. The White Shepherd will tend to ignore those trainers and attempt to train the trainer himself. Instead, it is crucial that the trainer views himself as being the pack-leader so that the dog can also see this and thus learn the things that need to be learned.

They are extremely loyal, brave, heroic and will not think twice about sacrificing themselves for their caretakers. They need companionship as well, and should not be left alone for a long period of time. They may be wary of strangers, but will bark only when it is necessary. In this regard, they are often used as police dogs. They have been known to sniff out drugs, underground land mines, and gas leaks in pipes that have been buried as much as 15 feet (4.57 meters) deep.

Sometime before or during the turn of the 20th century in Germany, there was a white herding dog by the name of Grief who was the grandfather of a dog named Horand von Grafath, who is universally considered to be the founder of modern German Shepherds. It was from this white herding dog that the white appearance of these dogs come.

They have a double coat. The outer coat is straight, dense and harsh, while the inner coat is short, fine in texture, and thick. The coat is often slightly heavier and longer at the neck (especially in males) and is weather-resistant. The color, of course, is white.

The fur is relatively long (especially in some areas) and is constantly shedding. These dogs need to be brushed every day. However, bathing should be done only when necessary as too-frequent bathing can result in oil depletion and skin irritations. Check their ears and trim their nails on a regular basis. It is best to begin trimming their nails when they are still puppies so that they get used to your handling their paws.

They are of the Medium-size group of dogs and have an equally proportionate body type.

They are okay in an apartment as long as they are exercised appropriately; better yet is to have them in a home with a large yard.

In training, treat the dog nicely, but do not treat him as an equal or as another human. If you do, then he will very likely treat you as a dog. In terms of physical activity, daily strenuous activity such as long brisk walks, jogs or runs are good. Better yet is to combine these with 10-15 minutes of games such as fetching. 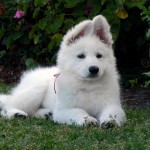 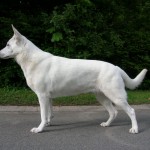 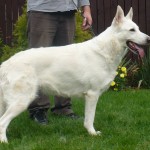 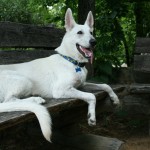 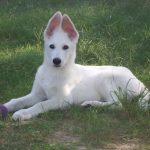 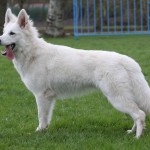 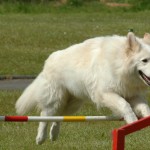 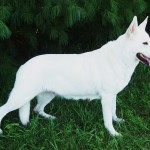 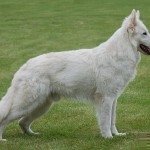 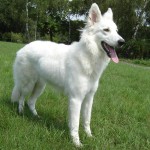 Specific feeding instructions are not available. However, as they are subject to food allergies, it is best to find out what, if any, foods they are allergic to and then avoid those.