Two very common features of Chihuahuas are that they shiver when they are cold, excited or fearful (and thus should have a tiny sweater on when they are out in cold and wet weather); and that they can be harmed (even though unintentionally) by small children who do not know their own strength, and the fragility of the Chihuahua.

Their ancestry may have begun in Mexico as far back as 300 B.C. However, some experts believe that they may have originated in Spain or Malta. Evidence for this lies in the fact that there are paintings (one being in the Sistine Chapel) of very similar dogs and which pre-dated the voyages of Christopher Columbus. Exponents of this latter theory believe that Spanish merchants brought small, hairless dogs from China to Mexico, which were then bred with Mexican dogs (most likely the Techichi).

Regardless, tiny dogs seemed to be sold to local tourists in the early 1800s and in 1850, they reached out to a wider audience. American tourists came to the Mexican state of Chihuahua to obtain these dogs. In 1890, they appeared in their first dog show and, a few years later in 1904, were recognized by the American Kennel Club. They have fluctuated in popularity, with being extremely popular in the 1930s to 1940s. For the past 50 years, however, they have remained extremely popular, with Paris Hilton being famously associated with them.

An enormous amount has been written about their health (or lack of it, or their common and numerous medical conditions). Very briefly, though, they are very prone to having patellar luxation (slipped stifles), hypoglycemia, heart murmurs, pulmonic stenosis, collapsed trachea, hydrocephalus (spinal fluid collecting in the brain), open fontanel (in which the top of the puppy’s skull remains open as he matures) and shivering. Even with all this, and even with the fact that they are the tiniest breed, they are the longest-living breed, with a great many Chihuahuas living to be 20 or more years.

They are most commonly known to be lively, quick, alert, courageous and devoted.

Because of their very small size, they can live comfortably within an apartment. However, they do need to be active outside, and should be given long walks. They should not be walked for too long because, like the Energizer Bunny, they will keep going and going until they drop. Thus, their exercise needs to be monitored carefully.

They can be trained very easily, and excel in activities involving agility and obedience. Training them in a classroom-like environment will greatly enhance their socialization. They can be housetrained equally easily.

Like other very small dogs, they can be barking machines. However, proper training and socialization should wean them away from doing this. Chihuahuas often bond to one person, and are like terriers in that they are alert, suspicious of strangers, and make good watchdogs. Although they may have the temperament for being a good watchdog, people who see them (and their tiny size) think otherwise. In this regard, they are more of a nuisance than anything else.

They are instantly recognized for their tiny size. However, a few have grown to be 12 to 15 inches (30.5 to 38.1 cm) in height. Also, although most have very short fur, others can be medium in length.

They are tiny and are the smallest breed of dogs, with a weight to match. However, some dogs can be 12 or more pounds in weight (5.44+ kg).

Their coats are of two different types. The first one is of a smooth, shiny coat and having longer hair on the neck and with a furry tail. The second is of a flat, slightly curly soft coat with a fringe of hair at the ears, a plumed tail, and longer hair on the hind legs and stomach. Chihuahuas come in virtually any color and shade and may be monochromatic, or have two or more colors. The most common colors are black, chocolate, white, cream, fawn, red, blue and silver.

In addition to standard grooming, special attention should be directed toward the ears, eyes and fast-growing toenails.

They belong to the Toy group of dogs, and have the petite characteristics of them.

Chihuahuas living up to and exceeding 20 years are relatively common.

They ought to be exercised outside, but should not live outside as they can become victims of animals or birds of prey. 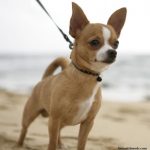 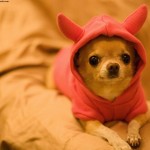 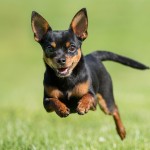 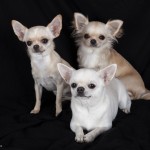 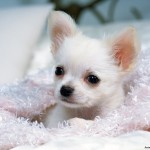 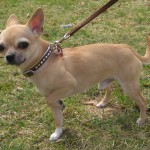 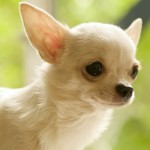 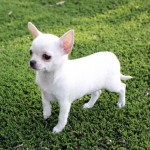 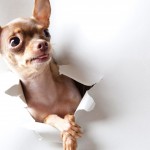 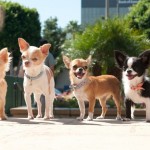 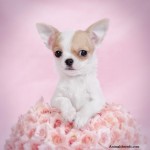 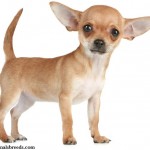 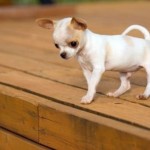 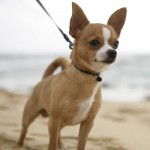 They are active, but because of their very small stature, they do not require much food. The recommended amount is 0.25 to 0.5 cups of high-quality food each day, divided into two different meals.

Information and Facts of Chihuahua :