This dog comes with compact bodies and bay faces. From the looks, they are appealing breeds that looks as if they have been taken good care of in every given way. These dogs may be very small dogs but they are very tough. He is not termed as toy dogs despite their size. Most bichons are always white in color but some f them may be cream in nature.

Actually, the origin of e dog is not known. Nevertheless, facts have it that he descended from the Spain, Belgium, and France. These facts dates back when the France sailors brought them back. Other historians still believe that the Spanish seamen brought the dogs back. Regardless of how they came into being, they soon became a common figure in most royalty. Within many king places you could find the dogs. In USA, they were brought in 1956 and they soon become favorites of many people.

These dogs health should not be an alarm, but like any other animal they are can be attacked occasionally, hence the need to be knowledgeable about diseases and the modes of treatments. When purchasing these puppies, it is prudent that you buy it from known people who have dog’s clearance certificate showing that they have never been attacked at any time at all. The most common diseases are bladder problems, allergies, patellar luxation, and vaccination sensitivity among more.

This breed has a merry temperament. With a very cheerful attitude. They are family dogs that are loved by everybody. What it enjoys most is to be the center of attention since it likes to be loved by other members of the family. He has an outgoing personality but that does not mean that he likes being alone, he likes being with people. Moreover, he can suffer from anxiety when left alone for several hours by the caretakers.

This small breed does not require too much activity although small walk daily will suffice. When doing this makes sure that, you show him a lot of love so that he may not feel neglected. Apart from the walk, they prefer some time to play and they like the company of elderly people very much. They can bring more life the home of people who have recently lost their spouses. Since most do not require intense exercise, apartment people can enjoy staying with them.

These breeds are very much easy to train. They love to take instructions and in the process, they please the owners so much. Since they do not have a dominant trait in them, force is not necessary at all when you are dealing with them, otherwise you can easily damage their moods and destroy the whole process of doing this. Since they perform well in formal training, they can easily learn advance tricks to entertain the neighbors.

For a first time dog owner, he has been found to be excellent dogs. He makes good companions to other animals and people. Bichons are breeds that can be trusted to stay without running away although house training is not advised. If they are separated from their owner, they tend to be stressed so much. If this happens, they can show signs such as chewing, barking, and even relieving themselves in the house. In addition, these breeds have high-pitched bark that can sound like a shrill.

This dog is small and his puff is like powder. Most of them are white with very thick coats that stands away from the skin of the animals some Bichons are always trimmed to look round while clipping once in awhile will still do for home dogs. His eyes are dark and very expressive and with a nose which is black hence in contrast with the color of the body. They have plumed tails that hang over the backs.

Although most of them come in one color, he may have streaks of some colors on his tough. For some, they have distinct texture due to double coats, which they sport in them. The hair is not on the body but is puffed outwards to give it look that resembles a ball. Some people might assume that these animals do not shed just because they do not leave any hair in the house, but this is not the case.

This is very important to the dog and should be done with care because he is prone to skin conditions. Since their coats are white, sometimes he gets dirty quickly hence brushing is essential twice a week. Since they are prone to eye tearing, specialist can recommend some drugs. In addition, he needs some brushing of their teeth at least 3 times in week.

Bichon has a small body type but well balanced

Bichon’s hair extends towards the outside making him to look like a ball.

Although he is very active, they do well when kept indoors by the owner. 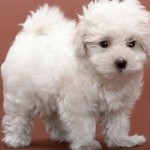 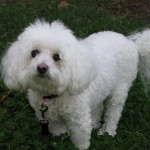 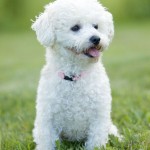 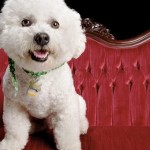 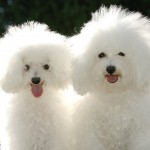 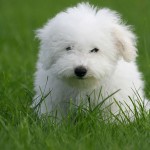 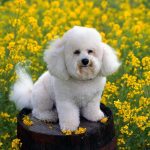 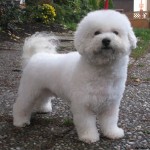 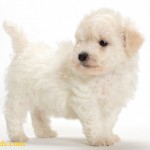 The recommended food should be a balanced diet and this should be half to one fifth of a cup of high quality dog food. However, the food amount and quantity will still depend on the size of the dog hence a point of caution should be taken when serving.

Information and Facts of Bichon Frise :