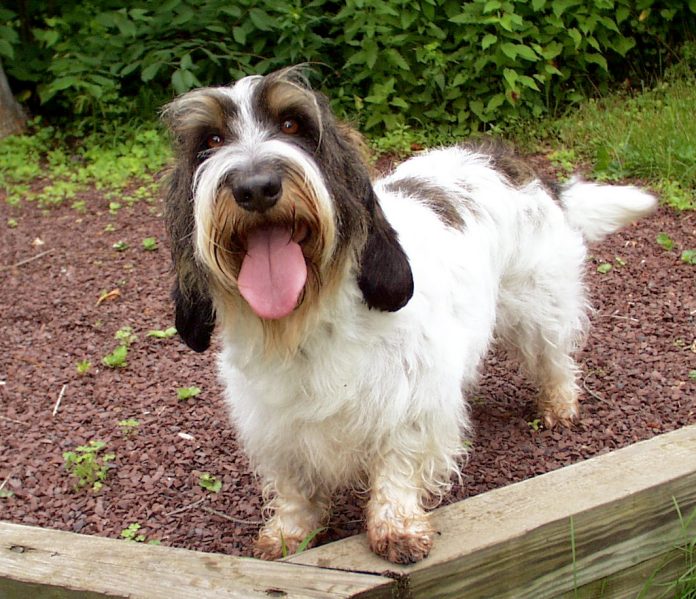 Also referred to as the Vendeen the western coast of France according to the area where the dog originated. This vocal, active and extroverted breed is not good for the ones requiring a sedate pet. It was bred to hunt especially in the packs. The Petit as of now socializes perfectly with various dogs enjoying their companionship immensely. They are known for their bushy eyebrows, mustache and beard.

The animal is one of the entirely French breeds still utilized for its main function, which is hunting purely through scent. The France western coastlands are thick with thorns, brush, rocky and brambles. For a canine to be effective in its hunting it must be focused, independent, smart, physically and mentally fit in these terrains that are harsh. The Griffon descends from a more powerful, larger Petit Vendeen that was for hunting a dissimilar type of game.

This included deer and wolf for it was 25 inches taller especially at the withers. Grand Basset Griffon Vendeen followed as the next smallest size then lastly the Petit Basset Griffon Vendeen. Its major role was to drive and trail small prey like hare, fox, fowl and the rabbit while the hunters followed. The earliest PBGVs were brought in the United States in 1983. They later qualified for the AKC championships as the Hound Group members. This led to its popularity worldwide especially in North America.

This is one of the healthiest breeds in the world. However, just like any other dogs it is some health concerns. They include ear infections, glaucoma, patellar luxation, hip dysyplasia and persistent pupillary membranes. This, therefore, requires you to have the animal tested before purchasing them. The puppies should be checked of Patella Luxation as the syndrome never affects mature dogs. The ears should also be examined carefully.

They are also called the happy breed. The Petits have an even temperament. This is because the animals are enthusiastic as well as good-natured. They love being close to human beings. The dogs are generally charming and willful thus enjoyable to be around them. The animals are very curious thus qualify to be great escape artists.

The dogs need enthusiastic exercises to keep their good health, happiness as their even temperament. There should be activities not less than daily walks, as well as chances to run around freely and stretch their legs. When bored the PBGV may have a destructive behavior thus requiring mental stimulation that include interesting activities to keep them busy throughout the day.

PBGVs are hound dogs thus a challenge to train. The training sessions should be short to exploit the short attention span of the animal. This is done in the early stages of its growth to create some sense of leadership. The whole process of coaching the Petit should therefore be consistent. This is because the canines may walk all over the instructor who changes the rules even the slightest.

The dogs are curious naturally. They should never be left without supervision as they can misbehave. The breed barks often thus will notify you when there is a new movement outside. This can be irritating to both you and your neighbors.

This is a small dog covered by a tousled-looking, wiry and harsh coat. They have short legs and have a top line level. The animals have a shaggy beard, ears, and eyebrows. The long rough hair aids in protecting the dogs while hunting especially in thick bush. The Griffon has a low set of ears that are hanging and drop.

They have an average height of 13 to 15 inches at the shoulders regardless the sex. They weigh from 30 to 38 pounds. The puppies may weigh less.

The breed has a double coat which is rough, medium-length and harsh to touch. The undercoat is thick, soft and short. Its eyebrows are long sticking outside to avoid covering the eyes. The dogs are white with a combination of markings that have a range of colors that include orange, black, sable, grizzle, tricolor and lemon.

The dog requires to be brushed twice or once per week to loosen up the hair.

The body is longer than its height with 30 pounds.

They have a destructive behavior when bored thus should be given interesting things to do. The breed should be given advanced agility course training. This boosts their mind by keeping it active.

The animals require bath only when needed. The ears demand regular check up for signs of infection and buildup. They should be cleaned using a cotton ball as well as an approved cleanser from the veterinarian. You are required not to insert a cotton swab on the ear canal of any dog. The teeth ought to be brushed weekly to promote gum health and get rid of any bad breath. The nails should also be trimmed monthly. 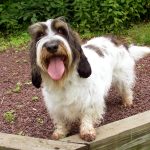 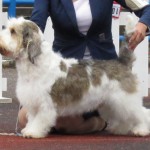 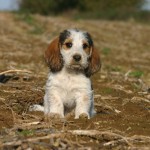 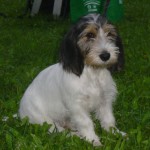 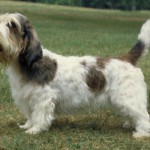 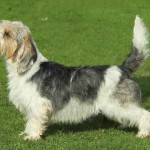 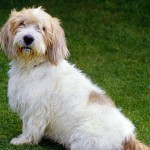 You should feed the breed with a daily amount of 1.5 to 2 cups of the best quality food a day. The dogs should be fed twice on a daily bases. You should always give the Griffon different kinds of foods and not one type only.