This dog is famous for his intelligence, tenacity, and trustworthy the dog is apparently very much fond of children. Most experts advise that the dog should be properly trained to prevent him from becoming aggressive. The dog has a very smooth skin with a lot of strength.

This breed is an English breed. According to history books the rearing period of this dog dates back to many centuries. The reason he was being reared was due to dog fighting which had not been outlawed. After the Second World War, the dog breed was brought to the United States where they played a god role as being the companions of human beings. Besides, in America they were bred to be taller than the original dogs, which came before them.

Unlike other dogs, this breed can live for a very long time sometimes that can span for up to 14 years. Since he is a very active dog he does not fall ill often.. The most common diseases that can afflict him include, cataracts congenital Deafness, hip diplasysia, patellar luxation among others. Before you purchase any breed it is important to ensure that the breed you are purchasing is having a clean bill of health.

This breed resembles other types of dogs but they look a lot tougher than these dogs. This dog prefers to walk or romp around rather than just relax somewhere or Stay indoors imposing. Since they enjoy full life, they like new experiences and will look for something new to concur at any given time or day. Irrespective of the activity that you are involved in they like staying near you. However leaving them alone will cause them a lot of boredom that can even lead to stress. Do not, let them next to toddlers but on the contrary they can accommodate older kids.

When left alone they can sit all the day, but for their health, it is important that you give them some exercise to make them a little active. They enjoy walking, jogging and hiking with their owner and it is important to enroll them in agility classes. Since they can easily adopt they can stay in any kind of home from apartments to bungalows.

Even though they love their owners, they do not care about what they are being told which can make them hard to train. If you are not sure on how to train them, you should consult with other dog owners on the best way to train them.

They have well-developed jaws and enjoy chewing a lot especially when they are puppies. For you to keep your furniture well taken care of it is important to buy chewing bones and toys otherwise, they will resort to your furniture which can be destructive. Adults are very much aggressive hence should be kept in fenced home.

From the looks, the dog appears as medium sized but very agile. He has strong jaws while the head is rather small. The eyes of the dog are round and dark but this often complements the color of the body. His teeth often meet in scissor bite.

The female Staffordshire terrier weighs around 16 kilograms while the males are 17 kilograms. The size and the weight of the dog is mostly proportionate. They are 16 to 17 inches at the shoulder.

Staffordshire terrier has a short and a smooth coat. This can be red, white, black, fawn, and blue. They cannot be completely black or tan. The coat of this dog often lies close to the skin.

Unlike other breeds, this dog do not get dirty often, for cleaning, weekly brushing is recommended hence you should do it well. At the end of the year, they can shed the entire coat but during the year, they shed moderately. Apparently, unlike other dogs they do not have any dog odor hence should just be bathed as needed. For oral hygiene their teeth should be brushed at least twice a week.

He has a well-developed body, which looks extremely strong. Since they are very loyal to their master most people keep them for companionship. The dog’s average height can be even up to 20 inches.

Even though the dog appears very strong, he is not very much aggressive.

Though he can adopt well, the dog requires some walking once in awhile to ensure that he remains strong and healthy. When staying inside a yard, he should be kept locked to avoid causing any problem since he is very aggressive. Nevertheless, the dog is a companion dog, he does well in any kind of home.

The recommended food should be 1/8 to 2 cups of high quality dog food give twice daily. It is important to note that like any other animal this dog’s food should be consumurate to the size. The bigger the dog the more the amount of food given. 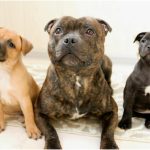 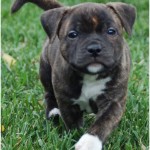 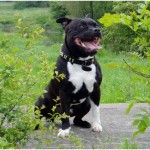 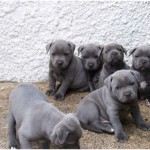 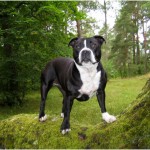