The French Bulldog originated, contradictorily to its name, in England in the early 19th century. In England, many dogs were bred with many other breeds of dogs. By 1850, the Toy Bulldog was produced. At about the same time, lace workers migrated from Nottingham, England to Normandy, France and often brought the Toy Bulldogs with them. By 1860, these dogs had become so popular in france that most of these dogs were exported from England and brought into France. They arrived in the United States in 1896, and are so popular now that they are the 11th most-popular dog in the United States.

As a breed, they are very prone to hip dysplasia (as are an overwhelming number of dogs); brachycephalic syndrome (found in many dogs with short heads); allergies (specifically food-based allergies; contact allergies, such as to flea powders, dog shampoos, bedding; and airborne allergens such as dust, pollen and mildew); hemivertebrae (a malformation of the spinal column, leading to pain, weakness or even paralysis); patellar luxation (very common in small dogs); intervertebral disc disease (IVDD–another spinal column condition); von Willebrand’s disease (a blood disorder found in not only some dogs but also humans); cleft palate (from which many puppies do not survive, and for which the only treatment is surgery); and elongated soft palate (resulting in breathing difficulties).

There are many ways to describe them. The most common ways are that they are bright, keen, alert, easygoing, patient, athletic, lively, playful, affectionate and sociable.

They are not highly active but they do want and need (to keep from becoming overweight) a daily walk. Because they can become exhausted in the heat, it is best to exercise them in the early morning or evening.

They are very intelligent and obedient, making them ideal for training, but they can also be free-thinkers, making them somewhat stubborn at times. Perhaps more than that, they are very adaptable so if one training technique does not work then try another.

They are wonderful family pets due their being very gentle in nature. If they are acclimated to others at an early age then this enhances their relationships with others. They get along extremely well with children, and are patient and kind toward them. They are very good watchdogs but, because they do not bark excessively, they are very well-suited to living in an apartment complex.

French Bulldogs are muscular and with an equally hefty bone structure. They are compactly built, with a large head, slightly rounded skull, ears similar to that of bats, and a thick, muscular and well arched neck. The hind legs are noticeably longer than the front legs.

The coat is described as being short, shiny, smooth and fine. The colors are of virtually every color and shade. For shows, however, solid black, liver, steely gray, and black with white or tan are not acceptable colors. There really is no such thing as a rare color when its comes to French Bulldogs.

Frenchies are average shedders, fairly easy to groom and require only an occasional brushing. While grooming, be sure to check the skin for scabs, bare spots, rough or flaky skin, skin lesions or signs of infection, and to check the ears, eyes and teeth for similar conditions or infirmities.

Their body type is that of the Small Dog group.

Due to their relatively large heads (in relation to their bodies) and because of the mothers’ relatively small hips, 80% of French Bulldogs need to be delivered by Caesarean section. Many celebrities have or had French Bulldogs as pets. One French Bulldog (costing the equivalent of $17,000 today) died as a result of the sinking of the Titanic.

Overall, it is very easy to care for French Bulldogs; they do not require much in the way of grooming or activity. Be aware that they are prone to drooling, and flatulence (and a minimal amount of shedding) so if you cherish cleanliness, then this may not be the best dog for you.

It is recommended that they be given 1 to 1.5 cups of high-quality dry dog food each day, divided into two separate meals. To prevent them from becoming overweight, they need to be exercised daily, in weather that is not hot or humid. 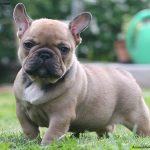 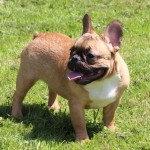 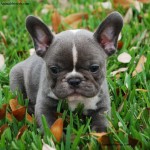 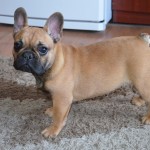 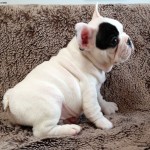 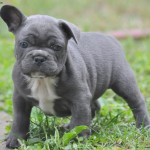 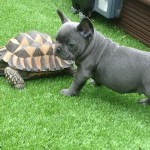 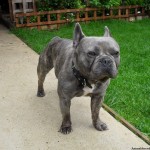 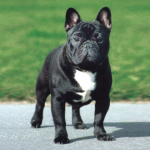 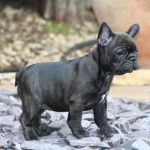 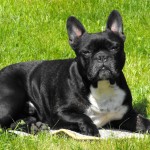 Information and Facts of French Bulldog :