The Toy Manchester Terrier is full of spirits. He is very cunning and intelligent. This dog is always eager to learn. He certainly displays a true terrier nature, that is, alert, sporty, lively, faithful, and independent. In addition to all these, the dog is also devoted and discerning. He surely makes an incredible loyal friend and terrific watchdog too. This dog native is in England. This breed of dogs has naturally erect ears. The dog does not love being left alone for a long duration. This makes him become nervous and bored. It can lead to destructive behavior such as digging of holes. He can bark excessively if the environment and owner permits him or leaves him to amuse himself. To avoid bad behaviors, ensure he takes part in plenty of exercises. This is a sure way of preventing any naughty behaviors. The more busy and occupied the dog is, the less trouble you will be in.

As the sanitation was very poor in the 1800s, rats were a stubborn menace. For this reason, the dogs ensured that rats were kept in check. Besides, rat killing stood out as a very popular sport during those days. After banning of the sport, these dogs still had plenty of work to do. They were used mainly in the areas that were highly infested by rats. During the evenings and at night, owners would let these dogs loose in order to snatch any rat roaming around.

You can rest assured that the Toy Manchester terrier is a very healthy breed of dogs. Nonetheless, it can suffer from a number of dog conditions just like other breeds. One of the dog conditions that can affect this dog is Glaucoma. This is a very painful disease whereby the eye’s pressure becomes very high. Normally, the eyes produce and drain a fluid by the name aqueous humor. Failure of this fluid to drain properly leads to this condition. The pressure inside the eye skyrockets. Primary glaucoma is hereditary while the secondary glaucoma comes as a result of injury, tumor, or inflammation.

Von willebrand’s disease is another condition that can affect Toy Manchester terriers. This condition can also affect humans. It is a blood condition, which affects the process of clotting. Infected dogs have symptoms such as bleeding gums and frequent nosebleeds. A variety of treatments is available to combat this blood disorder. Heat bumps can also affect your dog. The bumps normally appear long the back of the dog if he or she stays out in the sun for long.

What is for sure is that this dog adores his owners. He is a social creature who completely hates being idle or alone. Although the dog is that aggressive, he is bred for purposes of killing small animals. This means that it can be a great or bad idea for him to live in a house full or rabbits and rats depending on the needs of an owner. The dog can turn out to be snappish, protective, and headstrong.

Since he hates being alone and idle, ensure that this dog has plenty of things or activities to do or take part in.

He is easy to train. The fact that the dog is anxious to learn means he is quick to grasp any lessons you bring his way.

He is well mannered when busy. Avoid allowing the dog to be idle because he will cause trouble.

The dog is long legged and small. He brings with him a short coat that is usually marked with the color tan. He also has a relatively long tail. His ears stand upright.

The average height of the Toy Manchester terrier is between ten to twelve inches tall while the weight is anything between six to eight pounds.

His coat is short tan and black.

The good thing is that his coat requires little maintenance because it is short. Brush him once in every week using a bristle brush or rubber.

His body type is well muscled and compact.

The dog brings with him huge food appetites.

This breed of dog needs mental stimulation and exercises on a daily basis. For thirty minutes every day, ensure he goes for walks, disc games, agility, obedience and runs. Refrain from leaving him to hang out alone at the back yard. This is highly discouraged.

The recommended intake of dry dog feed is between a quarter and one cup, which is divided into two or three meals every day. Ensure the quality is top notch. 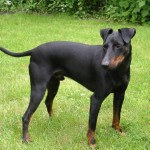 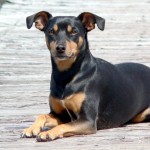 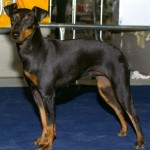 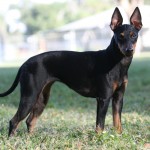 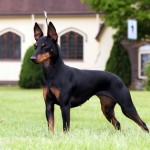 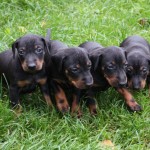 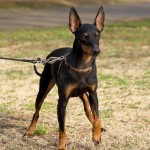 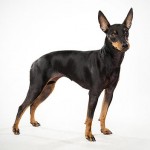 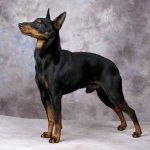