They are extremely rare and are the least well known breed in the United States. They are rare in not only the United States but also their home of France. After World War II, they were almost extinct. They are bred for the hunt and are probably best in that environment. However, if you are a family in a rural or small community, then they could be great companions for you. Their most distinctive and unique feature is their coat, which is usually a shaggy white coat.

These dogs are a direct descendent of the Grand Griffon Vendeen. The latter dogs were large and used to hunt wolves and boars. However, some hunters wanted dogs to hunt smaller animals such as rabbits. Starting in the 1600s, breeders bred the smallest of the Grand Griffon Vendeens, and possibly used smaller breeds as well. This eventually led to the smaller and distinctly different breed called the Briquet Griffon Vendeen. However, after World War II, they were close to extinction but were saved from this by French dog fancier Hugh Dezamy. Nevertheless they are still extremely rare except, perhaps, in their native home of France.

Perhaps due to their rarity, or due to the success of their breeding, there are almost no medical issues. They only rarely exhibit the common luxating patella, and have equally low incidences of distichiasis. It is possible that they can also suffer from Collie eye anomaly (which can cause blindness); deafness (as congenital deafness runs in this breed); hypothyroidism (common to very many breeds); epilepsy; and various allergies.

They have frequently been called independent, dominant, hard-working, devoted, dependable and passionate.

They are extremely active; in fact, they are one of the most active breeds around. As such, city or apartment living is not suited to them. They need to be in a rural community with a great deal of space to roam and hunt. They do not tire easily.

Because of their independence and stubbornness, it is very difficult to train them. However, they do respond well to being praised, cajoled, given treats or played with.

They can be playful, fun-loving and jovial, but they can also be unruly and independent. They can do well with other pets, provided that they have been raised together. They are generally not good around young children (those below the age of eight) but are good with older children as they tend to be more considerate and understanding of dogs.

The Briquet Griffon Vendeen has low-set ears, heavy hair around the eyebrows, longer hair around the muzzle which appears to make it have a mustache, a bushy double coat and a short head.

They have an outer coat which is long, wiry and dense and an inner coat which is soft and thick. Common colors for these dogs are light brown, fawn, white & gray, white & orange, and tri-color.

Because of their somewhat long coat, matting can easily occur. To prevent this, you need to comb them regularly. In addition, if they do take long walks or runs in the woods then the burrs and mud that it picks up should be removed from their legs and belly. However, bathing should be done only when it is necessary. The long ears can be a breeding ground for infections and should be cleaned on a regular basis.

They are a sturdy and well-proportioned breed of dog.

Specific dietary recommendations are unavailable. However, as they may be allergic to some foods, it is best to take your puppy/dog to your vet to find out what, if anything, it is allergic to and then avoid that as much as possible. 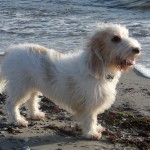 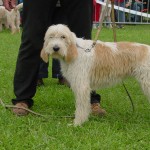 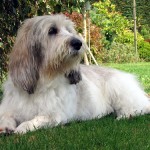 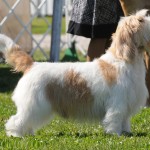