Rough Collies are generally bred in the Scottish Highlands and also in some highland areas of Britain, specifically for the purpose of herding sheep. These dogs are very intelligent and sensitive to the needs of the owners. They are rarely aggressive, which works quite well for herding sheep and make amazingly loyal companions.

Rough Collies were basically descendants of the Scottish and Welsh herding dogs. While the Scottish dogs were large in size and quite aggressive, the Welsh ones were smaller and more mild-tempered. A cross breed of these two dogs produced the Rough Collie which had some characteristics of both and was very useful for herding sheep and goat. Some theories also say that the Scottish dog was cross-bred with the Russian wolfhound Borzoi. In early 1900s, the Rough Collie became a kind of fashion symbol after Queen Victoria of England took one as her pet.

Rough Collies are generally healthy dogs but are prone to eye infections, specifically the ‘Collie eye disease’. They may also develop hip and joint problems. They are also extremely sensitive to sun and often require sunblock on their skin, especially while herding.

Rough Collies are generally very docile and mild-tempered in nature. They do not get aggressive without due cause and are always polite and friendly towards humans as well as other animals. They can be very playful around kids or other small animals and have proven to be very faithful pets with a strong protective instinct towards their owners.

His training requirements are quite moderate. A long walk or jog even once a day may suffice. They love to be free of the leash and exercise on their own. But they do not require a very big space for exercise and therefore can easily live in an apartment.

These dogs are very easy to train. They are intelligent and patient and can learn to follow commands easily if given in a calm but firm voice. They almost have an intuitive sense for taking care of the owner’s needs even before it is told what to do.

The Rough Collie is an extremely mild-tempered dog, so much so that it may almost be called timid. This makes him naturally vary of strangers and though he doesn’t get aggressive, he can be very shy and needs to be prompted to socialize. Rough Collies also tend to go into bouts of incessant and loud barking if they are bored.

The Rough Collie is basically a large dog with a long-haired coat. It comes in many striking colours and has a uniquely shaped head which gives it a noble appearance. It was very popular as a show dog and was a fashion statement because of it looks in the early 1900s.

This dog may be put in the category of medium or large dogs depending on the size. Most dogs are generally large with an average weight of 25-35 kgs.

The Rough Collie looks very attractive because of the beautiful colours of its coat. It comes predominantly in an elegant sable colour with markings of white or predominantly white with sable markings. It also comes in blue merle or a tricolour of white, black and tan. The coat is long and abundant and forms a kind of mane on the chest. The coat is straight but is very harsh or rough as the dog’s name suggests.

The long-haired coat of this dog requires regular grooming. It needs to be brushed weekly and if the undercoat is being shed, special care should be taken. Also, the long hair tends to get matted and then they might have to be cut or trimmed as combing them would be more painful.

The Rough Collie has a large, lean body with a thick long-haired coat. The head is often described as ‘wedge-shaped’ and the body is slightly longer than it is tall. He has a long neck which gives him an elegant look. Despite the large body, Rough Collies are not known to be very strong or powerfully built dogs.

1. He is a very sweet-tempered and friendly dog.
2. He is good with children as he is playful.
3. He is tolerant and even playful towards cats and other house pets.
4. He is a very faithful and loyal dog.
5. He is known to be reserved and an introvert.
6. He needs constant attention from the family members.
7. He does not require a lot of exercise.
8. He is easy to train.
9. Grooming him requires some effort but is generally manageable.
10. He is intelligent and learns quickly.

Rough Collies are very calm and sweet dogs and they prefer a tranquilizing environment. Loud voices or frequent fighting among family members can upset them.

Rough Collies love to stay around their families. If they are bored or lonely they can bring the house down with their barking unless someone pays attention to them and plays with them. They need to be cared for by involving them in all house activities and in ensuring that they get their regular exercise. 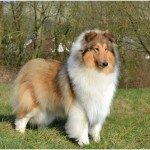 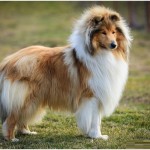 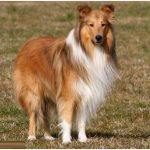 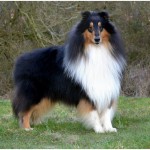 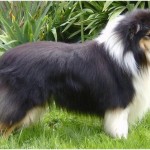 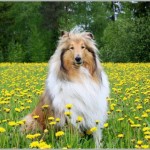 A good high-quality diet of dry food of 2-3 cups a day, divided into two meals should be quite healthy for an adult collie.

Information And Facts of Rough Collie