The Shih Tzu is a small, royal dog breed. It is also known as the Chrysanthemum Dog, the Lhasa Lion Dog or the Chinese Lion Dog. The dog is a primordial strain that dates back to the 600 A.D. This dog breed has a royal history as it was initially kept by royal Chinese families in the Ming Dynasty. These dogs appear snobbish and are suited for lying on silky pillow in palaces. They were specifically bred to be companions and they do not guard, herd or hunt.

These dogs were credited by the American Kennel Club, in 1969 and were characterized as Toy Group. The most distinguishable thing about this breed is the physical appearance. These dogs have a double coat that flows and sweeps the ground and their tail folds up on the back.

The Shih Tzu originated in ancient Tibet and China many centuries ago. The breed was developed by crossing Tibetan breeds with miniature Chinese breeds. This do was preferred by Emperors of China. The Shih Tzu became more popular during the Ming Dynasty and it was loved by both commoners and royalty.

This breed of canines was not known in the western world up until the 20th century. In England, breeding of this dog began in 1930 and 1932 in Norway. During the World War II, American soldiers loved this breed and they took some dogs to the United States. More dogs were imported into the country when American dog fanciers were captivated by them.

The term Shih Tzu basically means little lion. However, these dogs are not ferocious or fierce. These dogs are among the best breeds in the world because they can live in small houses, are friendly with other pets, hence good for families, elderly, and single people.

These dogs love attention and affection. They love sitting on the lap of their owner and are happiest when they spend time with the family giving and receiving attention. They tend to bark at new people or guests. However, they make friends easily.

They are basically lap dogs and are not outdoor or active canines. Therefore, a walk around the neighborhood or park meets the daily activity requirements for this dog.

Shih Tzu’s can be challenging to train. However, they comply quickly when they realize that they will get a reward. Training should start early, with short sessions and a variety of activities to keep the animal interested. They can be motivated to acquire new behaviors through treats and praise. Housebreaking this dog takes between six to eight months or even longer dependent on the dog. The process can be speed up by crate training.

They are very good watchdogs. These dogs vigilant and will bark consistently when somebody is approaching the house. However, if they are not trained properly, their barking can be annoying.

The Shih Tzu is a lively and sturdy dog that has round head, a black nose and an abundant mustache and beard. The hair that is above their nose tends to grow upward giving them a unique “chrysanthemum” face. They have round eyes that are dark in most dogs, but lighter in the liver and blue dogs.

They have a short, square muzzle that has no wrinkles. They have pendant ears that are generously covered with hair. They have a high-set tail that coils over the back. They have a heavy underbite that is characteristic of the Shih Tzu.

The idyllic height for both sexes is 9 to 10.5 inches. They have an average weight of 9 to 16 pounds.

The Shih Tzu has a thick, wooly undercoat and an abundant, long silky topcoat. They begin to shade their puppy fluff for the adult coat between 10 and 12 months. These dogs come in different colors like Liver, Black, Brindle, White Blue, Dark Brown, Black & White, Liver & White, Gold and Light Brown.

The ears should be checked every week for signs of irritation, wax buildup or infection. They should also be regularly cleaned using a mild cleanser and cotton balls. The teeth should be brushed once every week to inhibit gum disease and buildup of tartar. In addition, the nails need trimming once every month for dogs that do not naturally wear their toenails down.

They are prone to heat stroke because of their flat shaped face. Therefore, they should be kept indoors in air-conditioned houses when the climate is hot.

Ensure that your canine friend remains indoors during hot days as they are heat sensitive and may get heat exhaustion. The dog requires early training and socialization to prevent it from being timid in adulthood. You should careful and securely hold your dog when carrying to prevent him for jumping as this dog breed believes that it can fly. They tend to jump from a chair, bed or even when held and this can cause injuries or even a concussion. 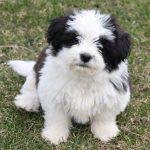 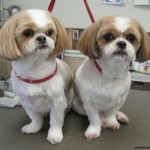 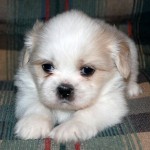 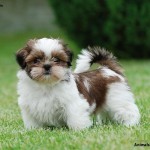 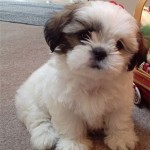 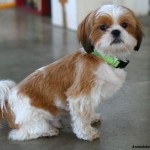 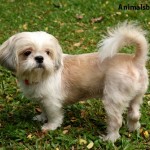 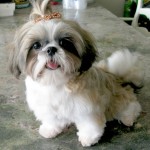 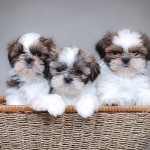 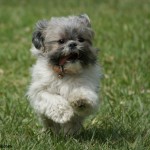 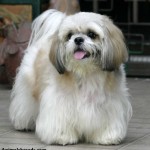 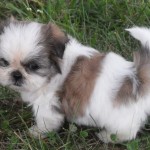 The amount of food they eat depends on activity level, age, build, size and metabolism. Shih Tzu should be given 1/2 to 1 cup of high-grade food every day.

Information and Facts of Shih Tzu :