This dog is rarely found outside of France. They can be very friendly with family and strangers, as are other similar breeds. Basset Bleu de Gascognes can be a very devoted and faithful pet, and are neither shy nor aggressive.

However, because they do not have a history of being with families (having been bred and raised usually for hunting purposes) and because of their other needs and characteristics, it may be difficult to keep them in a small home.

Like several other old, European breeds, they have been featured in paintings. The Basset bleu de Gascogne were shown in 14th century paintings from South-West France. It is thought that they were derived from a cross between the Grand Bleu de Gascogne and the Saintongeois Basset.

Both before and after the French Revolution, these dogs were used as hunting dogs. About 200 years ago, hunting became less popular, this dog was less needed and wanted then, and it became almost extinct. However, they were saved through the efforts of Alain Bourbon, a French breeder.

They are remarkably healthy and live for a much longer time than do other dogs of this size-range. When they do have a medical condition then it is usually hip dysplasia, ear infection or allergies. It must be noted that because of their rarity, no studies have been done on their specific health characteristics. However, the previous is known from similar breeds.

They are described as being curious, agile, active and, most of all, happy, affectionate and agile.

They are active so it is better if they have access to a large yard, park or other area where they can exercise. They are described as being of being medium in terms of energy level.

They are notoriously difficult to train. They are generally good working with other dogs, especially as part of a hunting pack. However, caution should be observed when introducing any new dogs as problems can easily arise.

They have the usual pack hound temperament as they have worked in packs for centuries; are successful hunters of both small and large animals, from rabbits to wild boars; are tireless trackers; and are quite athletic.

The Basset Bleu de Gascogne’s appearance is typical of that of other bassets: they have short legs and a long body, droopy ears, and a hound face. They have some resemblance to a dachshund.

The coat is short, dense and somewhat thick. It is usually of three (or more) colors, described as being black & white, with a lot of gray or silver, and often brown or wheatish shades appearing in patches. The black and white portions often give off an appearance of being bluish in color. (Although never stated elsewhere, this may have contributed to part of its name.) The black portions are the most prominent and appear on the dogs’ ears, cheeks, tails and sides.

Grooming is easy and does not require a professional; all that is needed is regular brushing. However, the coat may shed a lot of fur. Care should be taken around the ears. The droopy ears can easily become dirty and infected.

They are of the short dog breeds. More descriptively, they are longer than they are tall, with a ratio of 8:5. They have a long and well supported back as well as a long and roomy chest.

It is not a breed that is recognized by the American Kennel Club. They are one of three very similar breeds, the other two being the Grand Bleu and the Petit Bleu. When they have puppies, the litter is four to eight puppies. 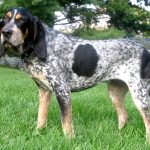 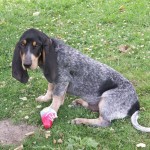 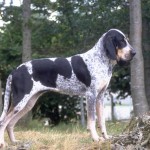 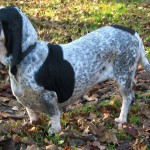 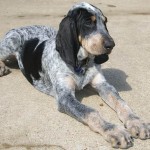 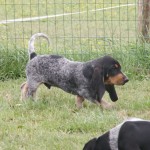 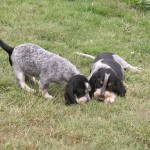 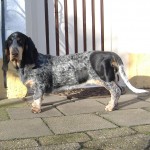 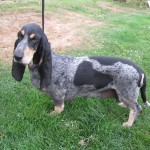 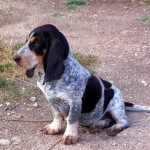 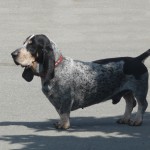 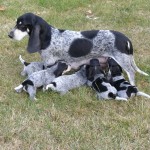 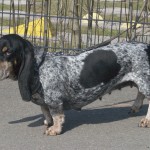 It is fairly easy to care for them. In grooming, potential problems around the ears should be looked into. It must also be noted that they were bred to make noises when they had caught, captured, or cornered a game animal. Thus, they can be loud, and loud for a long period of time. Neighbors in an urban setting can become upset

They do not require any special diet, and are considered to be very healthy and hardy, and should be able to live comfortably on normal dog food.