Bulldogs are wonderful pets and are ideal for single individuals, apartment dwellers, families and even couch-potatoes.

The English Bulldog is a descendent of the ancient Asiatic Mastiff, and originated in Britain. It was called “bull” because of its appearance and of its actual use in bull baiting. They actually fought full grown bulls in arena combat before this activity was made illegal in 1835. Meanwhile, in the 13 Colonies in mid-17th century, these dogs were trained to get and hold bulls by their noses until the latter were roped by people in New York City. During these early centuries, Bulldogs were taller and heavier than they are now.

After this, they began to become more popular and to be recognized as a separate breed for dog shows. The standard for these dogs was first made in 1896. Now, they are among the very most popular breeds in the world, although they were slightly more popular in the United States 60 to 70 years ago.

An enormous amount of all breeds are prone to having hip dysplasia, and an even larger number (73.9%) of Bulldogs suffer from this. In addition, they often have patellar luxation, cysts between the toes, eyelid problems and allergies. In addition, because of the folds on their faces, the Bulldogs’ faces must be washed daily to prevent infections brought upon by excessive moisture.

One unique feature is that 80% of puppies have to be delivered by Caesarean section because of their abnormally large heads. There is a great discrepancy in the reporting of life expectancy. However, everything points to the fact that their lifespans are not very long. Bulldogs often die at the age of ten or eleven from old age. More common causes of death are cardiac related (affecting one in five Bulldogs) and cancer (affecting one in six).

First and foremost, Bulldogs are friendly, docile, gregarious and willful.

They tend to be inactive, and very many of them sleep a great amount of time, and thus are good as indoor or apartment dogs. They are healthiest in temperate climates as they become too cold in cold temperatures, and too hot in hot or humid climates.

To prevent them from becoming overweight and from developing behavioral issues, they should be given some exercise, especially a daily walk. They to tend to be in good shape and can move quickly; however, they usually do not have much endurance.

They are easily and readily trained. However, a lack of training results in the fact that the bulldog does not recognize its caretakers as being the pack leader. This is actually bad for the dog as it causes undue stress on keeping its humans in line, according to his sense, and untrained dogs are not as happy as trained ones.

Even though they may appear fearsome (and, again, they have fought actual bulls in the past), they are extremely gentle in reality. They are very affectionate, dependable and gentle (especially with children), yet they are courageous and have excellent guarding abilities. They can be very persistent because of their bullheadedness and determination.

When you first see a Bulldog, you can observe its wrinkled face, courage and sturdiness, mellow and easygoing characteristics, and being friendly and loving even though it appears fierce and tough looking.

The coat is straight, short, smooth, glossy and fine textured. The colors are of a great variety: red brindle; solid white, red, fawn, cream or other off-white shades; pale yellow; or yellow-red. Some are solid black, but this can be frowned upon.

They are average in terms of shedding. Brushing at least once per week will help minimize the amount of fur that is left on fabrics and furniture. It is best to brush the teeth daily, and to start this practice when it is still a puppy.

Their body type is that of the Medium-Sized group of dogs.

They are bundles of energy when they are puppies but slow down when they get older. They are famous (or perhaps infamous) for sleeping, snoring very loudly, slobbering and drooling, and being messy eaters.

While grooming, check for sores, rashes and symptoms of infection such as inflammation, redness or tenderness on the skin.

They need to have 0.5 to 2 cups of high-quality dog food each day, in two meals. 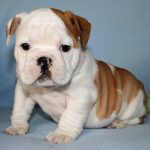 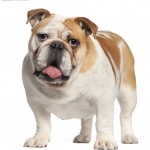 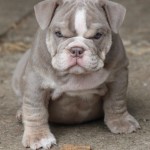 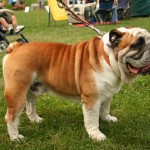 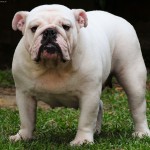 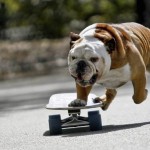 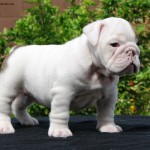 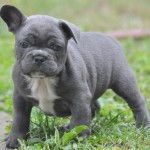 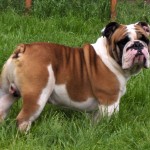 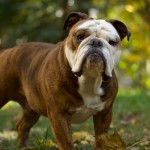 Information and Facts of Bulldog : 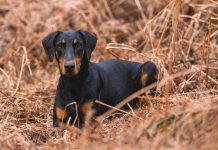